For years, Evangelos Biskas has kept a diary of his dreams. For In Between he extracts moods and intentions from his dream images to guide and shape his intuitive approach to dance.

The absurd and irrational nature of his dreams is his compass.

In In Between, Evangelos Biskas shares his bizarre isolations, uncontrolled looseness and organic flow with his audience in total open-mindedness and nonchalance.

His body connects directly to everything that seems to be going on inside him or in his surroundings.

How he does this remains unpredictable and surprising. He turns a lack of grip into melancholy, humour and understatement.

Evangelos Biskas (GR) is a dancer, choreographer, dramaturg, researcher and facilitator of physical encounters. All facets of his work are directly connected to presence and the process of expressive freedom. The nature of the human body is the heart of his creations which aim to make space for its adaptability, its intuition and its vulnerability. His curiosity to explore new possibilities of working with the body brings an interdisciplinary essence in his performances that challenge the boundaries of dance, physical theatre, contemporary circus, sound design and new media.

Evangelos graduated from the department of choreography at Fontys Hogeschool voor de Kunsten (FHK) in Tilburg, Netherlands (2016) and was nominated by the academy’s award ‘Jacques de Leeuw prijs 2016’. With his graduation work ‘Eternal Chilling’ (2016) he won the ‘Moving Forward-Young Dance Makers Award 2016’. His debut creation ‘In Search of a Title’ (2017) was a collaboration with Elysia McMullen (IR) and was produced by Dansmakers Amsterdam. From 2017 till 2020 he worked with PLAN, a talent development trajectory for young artists, through the scope of DansBrabant. His trajectory was finalized with the solo performance ‘In Between’ (2020). At the same year Evangelos joined Corpo Máquina Society as a maker. He recently premiered with his new work ‘Immortal Game’ (2022), a collaboration with Yiannis Logothetis (GR) and Virtual Reality company Improvive (NL). 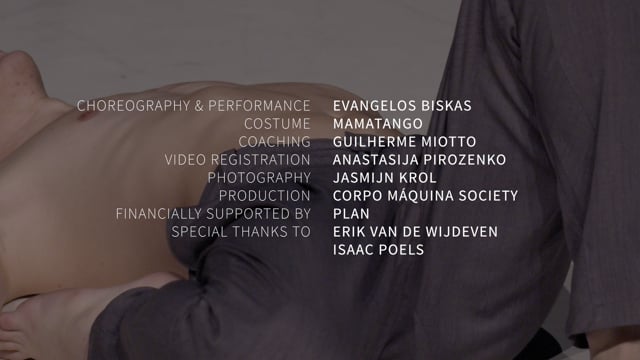