The prize is made possible in part by the Municipality of Maastricht.

Watch the video about the winner and nominees for the innovationprize. 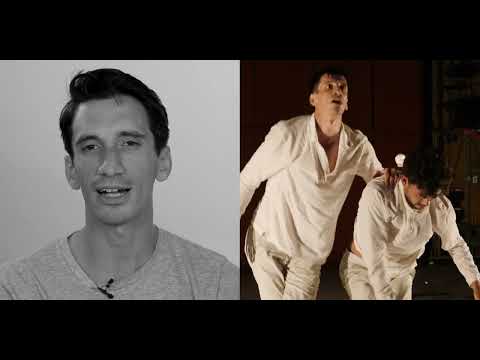 The Rotterdam community artist and choreographer Jordy Dik uses (dance) art as a means of merging different living environments. In this way he wants to cultivate mutual understanding, openness, creativity and reciprocity between people who do not come into contact with movement so easily. Since its foundation, Jordy has been the resident choreographer of the inclusive company Compagnie 21, in which people with disabilities collaborate with art professionals.

Groningen-based dancer, choreographer and theater maker Mohamed Yusuf Boss is the founder of the platform X_YUSUF_BOSS. Starting from dance, he builds bridges between disciplines and between community and individuals, with the quest for shared humanity as the core. For each project, he looks for the right community to enter into a dialogue with and to build with. Hip-hop and the 'each one teach one' principle form the basis of his signature.

Simon Bus starts breaking at the age of twelve. With breakdance crew 'Trashcan Heroes' he participates in battles at home and abroad. Due to his investigative way of looking and moving, his style slowly shifts to 'experimental'. Since 2018, Simon has also continued to experiment as a maker with urban dance forms such as house and breakdance. From his own hyperflexibility he turns these forms inside out and upside down and he knows how to stimulate his dancers in this as well. Starting from narrative themes, Simon uses movement to create space for associations and he arrives at abstractions that provide peace and at the same time invite concern.

His project with the working title 'IRL > URL' will be an interdisciplinary production, made in collaboration with an international collective of six kindred spirits, whom Simon met via Instagram and with whom he has a digital artistic exchange. For 'IRL > URL' everyone is given the assignment to make a self-portrait. After a few weeks of preparation in their own country, the makers come together during the Dutch Dance Days in Maastricht. In a live exchange they present their own fascinations and energy to the public. In addition, they work several hours a day on a joint final production, which will be shown during the festival.

The jury is impressed by Simon Bus's concept. His Instagram-driven art development fits seamlessly into the current era. Simon has 'Fingerspitzengefühl' to find the right people for his project via Instagram. What is special is that the choreographer presents himself as a curator in this project: he thus opts for an interesting form of creation, in which the work of art develops itself in the moment.

In today's dance field – which is characterized by a high degree of social engagement – ​​Simon Bus represents an original voice by profiling himself as an autonomous artist. He works steadfastly on an oeuvre with a clear, authentic signature. His extremely physical dance language is exciting and innovative. By awarding the Innovation Prize Nederlandse Dansdagen Maastricht to Simon Bus, the jury has opted for an intuitive, investigative maker who sets himself up as an innovator of artistic practice, of itself and of the urban community